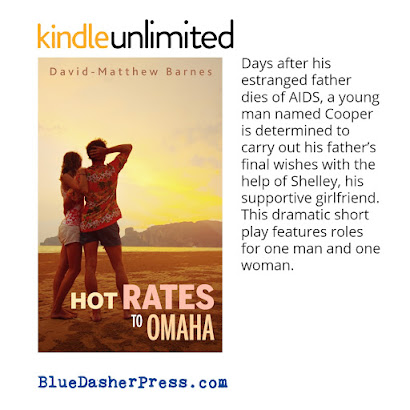 I am pleased to announce the publication of new short play Hot Rates to Omaha, now available from Blue Dasher Press.
By Blog Update - August 10, 2020 No comments: 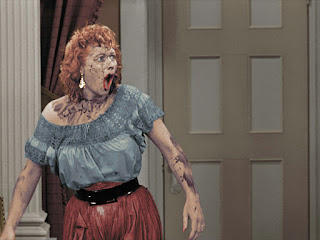 If you're feeling as overwhelmed and just done like I've been feeling lately, you might need an extra dose of laughter in your life. I certainly do. To bring a smile back to my face, I've been watching lots of wonderful episodes from one of my all-time favorite TV shows, I Love Lucy, including one of her most iconic performances in the episode titled "Lucy's Italian Movie." Laughter really is the best medicine.

Real talk: I know 17 people across the country who have COVID-19. Three of them are hospitalized. This pandemic is no joke. If you’re not staying at home (as we all should be), please wear a mask, practice social distancing, and be polite. I threw that last one in because apparently it needs to be said.

In more uplifting news, I recently celebrated ten years of being a non-smoker. One of the best decisions I've ever made.

Lots of information to share with you this month about writing projects and new releases. 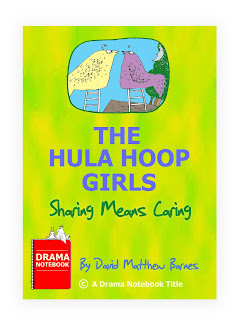 Very excited to announce the publication of a new installment in The Hula Hoop Girls, my series of short scenes written for young performers. This is the third script in the series. It explores the theme of sharing means caring. Many thanks to the great team at Drama Notebook for all of the terrific work they do and for the excellent resources they provide for theatre educators. If you know a theatre teacher, send them to Drama Notebook for some awesome teaching tools!

You can read more about 'The Hula Hoop Girls: Sharing Means Caring' here.

There will be two final Hula Hoop Girls scripts soon - both are in the works!

I’m honored to have a poem of mine included in Thought for Food, a wonderful new collection from South Broadway Press. This book benefits the Denver Food Rescue, so get a copy for yourself and a friend. 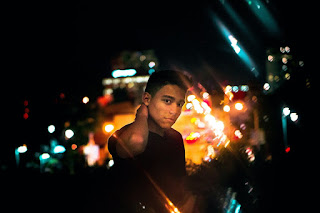 I wrote the first draft of this now very vintage poem titled Hickey when I was 15. I posted the poem on my personal blog Variations of Me for your reading pleasure. I remember the moment that inspired the poem like it was yesterday - but it wasn't. 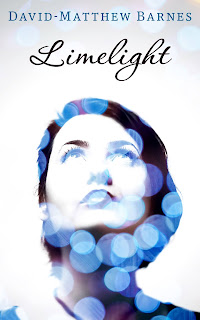 I have two new short plays out: Hot Rates to Omaha and Limelight. Each are available in Kindle Unlimited editions and in printable PDF's.

I was honored to be a guest author this summer at Camp Model City, a virtual (this year) summer camp for LGBTQIA+ youth (thank you, Andrea Patten). It was a lot of fun and I had the chance to work with a great group of young people. We wrote a group story together which was epic and awesome.

There are so many wonderful things happening with and for Dina Faye Gilmore's film adaptation of my short play Baby in the Basement. I invite you to go here to read more about this project and all of it's well-deserved success.

If free is your favorite price like it is mine, I invite you to visit the Giveaways page on this site. There, you will find a frequently updated calendar of dates when the Kindle Unlimited editions of my titles published by Blue Dasher Press will be available for free. Lots to choose from all month long! The giveaways are only happening through the end of 2020, so if you're reading this in 2021 or later, it was a lot of fun while it lasted.
If you're looking for an awesome audition monologue, the great folks at Performer Stuff offer more than 80 monologues from my plays to download. You can see a complete list of the monologues here.

While you're at it, hop over to the Free Scenes page on this site. There you will find a handful of scenes from my plays. All of them are ideal for acting classes. 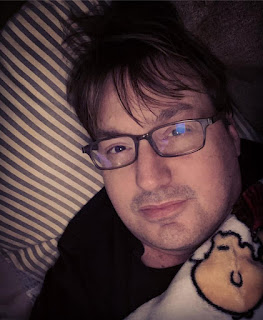 Please remember to be good to yourself - and to each other. 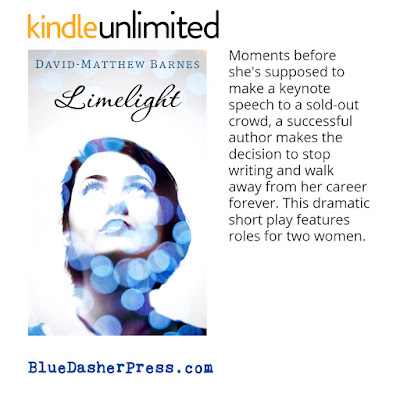 I am pleased to announce the publication of my short play Limelight, now available from Blue Dasher Press.
By Blog Update - July 17, 2020 No comments:

Life Stuff
Welcome to something new. Moving forward, I will be posting monthly updates here, covering a range of topics from life stuff to publishing and production news to what I'm watching. I plan to post an update on the first of every month.

Like many people, I've been working from home since mid-March. I might be in the minority, but I've enjoyed it. Not only do I feel safer (we rarely go out), my productivity is through the roof. I now get more accomplished with my day job than I ever did in my actual office. Also, my house has never been so clean. With that said, life does feel like it's stuck on repeat. I'm not sure what the future holds, but for now I'm taking one day (if not hour) at a time. 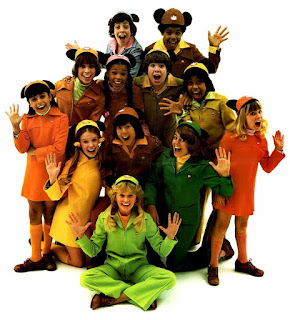 Most people who know me are aware of how much I love all things Disney. As a child, I used to fuel dreams of being a true Mouseketeer on the 1970's version of The New Mickey Mouse Club - a dream that never materialized but I still know the words to every song they sang including this one. I can't begin to tell you how much I miss going to the parks. We were supposed to be heading to Disney World in September for my birthday, but those plans were sadly canceled. Better to be safe...

Publishing News
Lots to share with you this month.

I have four poems featured in the new collection Scry of Lust 2, edited by Sumiko Saulson.

My story The Diva is featured in the forthcoming Chicken Soup for the Soul collection The Magic of Cats, now available to pre-order.

Also available to pre-order is The Magic of Dogs, another new Chicken Soup for the Soul collection, which includes my story Afraid. 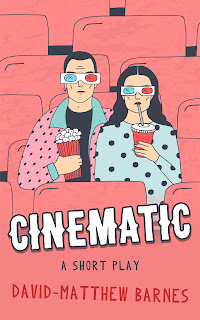 I have three new short plays out: Cinematic, Close Your Eyes and Count to Infinity, and Shallow End, which was recently named a top 15 finalist for the Billy Roche International Short Play Award. Each are available in Kindle Unlimited editions and in printable PDF's.

If free is your favorite price like it is mine, I invite you to visit the Giveaways page on this site. There, you will find a frequently updated calendar of dates when the Kindle Unlimited editions of my titles published by Blue Dasher Press will be available for free. Lots to choose from all month long!

If you're looking for an awesome audition monologue, the great folks at Performer Stuff offer more than 80 monologues from my plays to download. You can see a complete list of the monologues here.

While you're at it, hop over to the Free Scenes page on this site. There you will find a handful of scenes from my plays. All of them are ideal for acting classes. 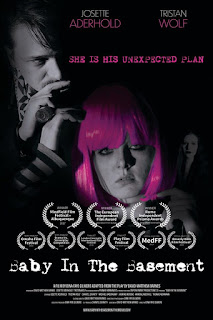 Dina F. Gilmore's film adaptation of my short play Baby in the Basement has hit the film festival circuit like a cinematic tidal wave. Already, the short film has been named an official selection for film festivals around the world and is in the running for several awards. I will be sharing more details soon. In the meantime, check out the official trailer for the film.

I invite you to watch the powerful opening scene of Coen Haver's beautiful film adaptation of my short play Boxcar (Dutch title: Wagon), filmed on location in The Netherlands. The entire film is poetry in motion. I can't wait to share it with you soon.

What I'm Watching
Over the last month, I've watched (or re-watched) a wide array of movies, including Thelma and Louise. Callie Khouri's screenplay is so perfect. And the casting is everything. Geena Davis and Susan Sarandon give masterclass performances. If you've never seen it, I hope you do. On a side note, the soundtrack includes one of my all-time favorite songs I Can See Clearly Now by Johnny Nash.

Edward (my husband) recently surprised me with the complete series of Charlie's Angels on Blu-ray. I was obsessed with this show when I was a child. I've already watched the first six episodes. 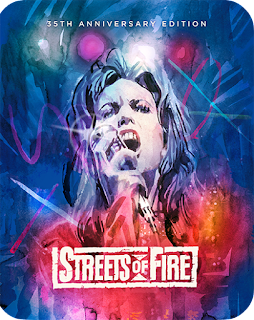 I'm not ashamed to tell you I recently watched the 1980's cult classic Streets of Fire (I recently bought the 35th Anniversary Edition Steelbook) and I sang along with the entire film, including the epic Tonight is What It Means to Be Young.

My Disney viewings this month included Alice in Wonderland, Hercules, and Summer Magic, starring the wonderful Hayley Mills. Thanks to Disney Plus, I also discovered the Ice Age film series. I had never seen it before. Now, I'm in love with it - so much so I bought a 5-movie collection on DVD. We also watched Artemis Fowl on Disney Plus. Maybe my expectations were too high (I love the books), but I was underwhelmed.

I had a similar reaction to Nancy Drew and the Hidden Suitcase. It was cute...but I was hoping for more. When will someone get a Nancy Drew adaptation right? The key is to stick to the books.

I was thrilled to find the complete series of Gimme a Break! on DVD. I had to special order this one from Canada, but it was so worth it. This show was so ahead of its time when it was first broadcast in the 1980's Watching it, I am reminded of what a comedic genius Nell Carter was. I recently watched a live motivational session/talk presented by former cast member Kari Michaelsen on Facebook. She's very inspiring. 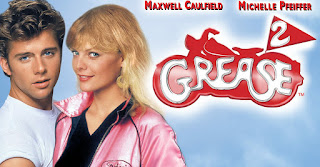 The highlight of my movie watching this month was definitely an afternoon I spent re-watching Grease 2 for the first time in many years. It's unfairly compared to the first film (Grease is untouchable). On its own Grease 2 is a fun flick and the songs are cheesy and awesome. I'm still singing Cool Rider a week later. 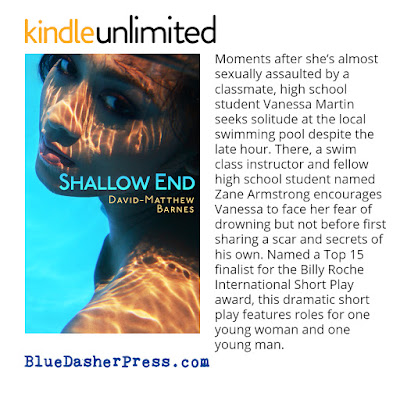 I am pleased to announce the publication of my short play Shallow End, now available from Blue Dasher Press.
By Blog Update - June 26, 2020 No comments: 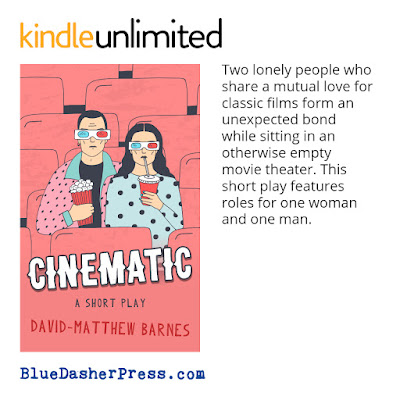 I am pleased to announce the publication of my short play Cinematic, now available from Blue Dasher Press.

This is a tribute to the many movies that I love. This is a love story for fellow misfits.
By Blog Update - June 12, 2020 No comments:

New Release! Close Your Eyes and Count to Infinity by David-Matthew Barnes 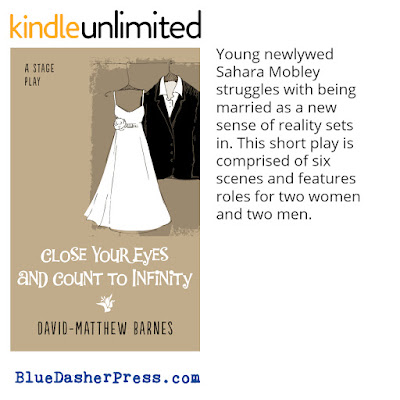 I am pleased to announce the publication of my short play Close Your Eyes and Count to Infinity, available from Blue Dasher Press.

This is a new play of mine. It's about marriage. It's about disillusionment. And the intersection of both.
By Blog Update - June 05, 2020 No comments:

We would love to hear from you.
Please direct all business inquiries to Angela Alvarez at BDPLiteraryManagement@gmail.com. A member of his literary management team will respond. Please note that emails sent to this address are not read by David-Matthew.